Chimney Removal: What Every Homeowner Should Know
Navigation

Your search did not match any result. Please try again.

Can’t find your business? Add yours

By login, you agree to Kukun’s terms of service

Are you a homeowner?

In order to claim or create a new business profile, you need to confirm your email.

Are you a contractor?

Chimney Removal 101: What Every Homeowner Should Know

When you’ve got a big decision to make about your home — like whether or not to remove your chimney — there’s a lot to think about it. Should you rebuild? What’s the process like? What should you expect to pay? What are the things you need to consider but haven’t, since you’ve never been through this experience before?

Well, let’s start with the basics. Welcome to Chimney Removal 101…

What to consider when removing a chimney 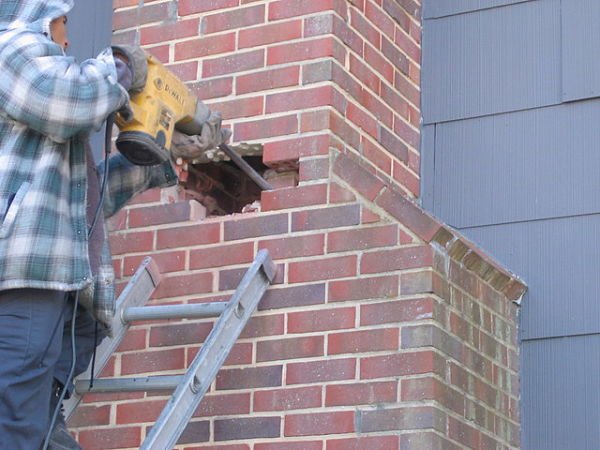 Before we get into price or anything else, let’s cover some of the things you need to consider, like:

The chimney is more than just an accessory, and all of these things need consideration before you move forward. So take some time to think on these questions, and make sure that any chimney removal company you choose to work with has answers to each.

What can you expect to pay for a chimney removal?

Cost can vary greatly for chimney removal, depending on the scope of the work. For example, does the chimney run up the side of the building or dwelling or does it come up through the center of the roof? What’s the height and width of the chimney? These factors will affect price, but the biggest costs are going to be in demolition, haul away, and dumping fees.

If you’re rebuilding the chimney, you’ll also need to factor in those costs. Chimney rebuild costs will vary depending on things like the location of the chimney, how many flues it will need, and the height and width of the new chimney.

As an example, for a typical two-story colonial home that’s maybe 2,500-3,000 square feet, you can expect to pay $7,000-12,000 to remove the chimney, retrofit whatever space is left vacant, make it watertight, and re-side it or close up the opening in the roof. If you add rebuild costs on top of that, you’re probably going to be looking at — depending on the area of the country — anywhere from $15,000-30,000 total (removal and rebuild).

Why do people remove their chimneys?

Most of the time, people only remove their chimneys because the chimney has been neglected for so long and it’s going to take so much to fix it, that it’s more cost-effective to tear it down and rebuild it or tear it down and close up the dwelling.

Is a full remodel what you are planning? See our ultimate guide on home improvement.

What can you expect when you call a chimney sweep about a chimney removal process? 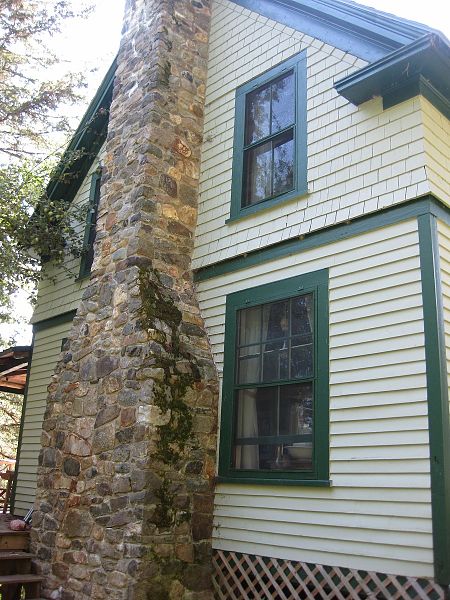 Rock chimney on the Summer House at Forest Lodge, by Beverkd from wikimedia commons [CC BY-SA 3.0]

When you call a reputable chimney sweep about a chimney removal, their first step should be to conduct a site survey. During a site survey, the company will assess the scope of the work and consider things like:

This site survey will help the company determine costs involved, as well as a timeframe for removal. From there, they should be able to give you a good idea of what you can expect to pay and when you can expect the project to be ready.

Can you remain in the home during a chimney removal?

You may be wondering, “Can I continue living in my home during the chimney removal process?” The answer is, thankfully, yes. If your chimney is on the exterior of your home, it’s not technically part of the home, but is instead adjacent to or up as close to the home as it can be. So, you can typically remove the outside of the chimney without opening up the inside of the home or exposing it to the elements (heat and cold) — which means you can stay comfortably at home during the process.

If the chimney removal does open up the home, as long as that opening is properly sealed, you should be able to remain comfortably at home as well.

Do you have to worry about water, insects, or energy waste during the chimney removal and/or rebuild process?

If the chimney’s location means that removal does open up the home — because the chimney went through an eve or the roof around it — the chimney removal company will need to be pretty quick about closing up the area or sealing it against the elements, especially if rain is in the forecast.

Why? Because it’s an exposed area with exposed woodwork and probably insulation, as well. You don’t want to get any insects, rainwater, sleet, snow, or anything like that in your attic or any other exposed area of the home.

Typically, the teardown or chimney removal process happens in a day and the company doing the work will use some type of heavy polyurethane sealing (like heavy duty plastic) to make the open area airtight and watertight. That way, if rain is in the forecast and they can’t come back to complete the job the very next day, the area will have protection against moisture and bugs.

Estimate your home remodel cost in just a few clicks with our free cost calculator. 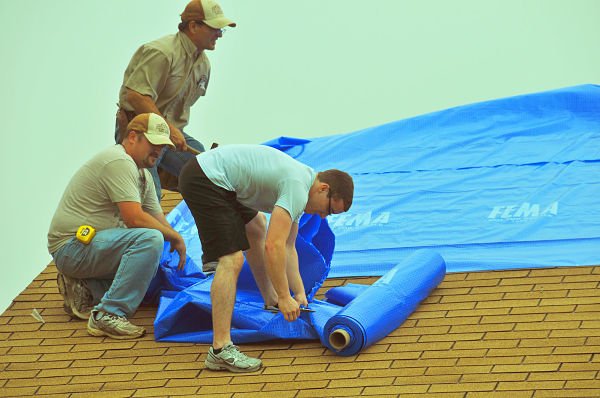 Sealing the area in this way also prevents heat loss (if the removal happens during the fall/winter) and cool air loss (if the removal happens during the spring/summer). Typically, the warmer months are perfect for chimney removals, and when you lower the atmospheric pressure in your home by cooling it, the natural laws of physics dictate that hot air fill that space. So if you don’t seal up the area, you’ll have hot air coming in through the opening, and running the AC will suck in more of that hot air, creating a vacuum.

Using a heavy duty plastic or something like it to temporarily seal up this area helps prevent energy waste while keeping bees, flies, insects, rain, snow, and sleet out of your home until the permanent sealing or rebuilding work takes place.

As you can see, it takes a lot of planning and logistics to think this project through so that all the materials are on site for a correct demo, haul-away, and temporary airtight and watertight resealing.

When is the best time of the year to have this kind of work done?

The best time to remove your chimney would be during the spring. Depending on the part of the country you live in, anywhere from the end of March until the end of May is probably best.

That’s when you’ll typically have the most favorable weather conditions for the job — when it’s not terribly cold or terribly hot. Of course, if you’re in a part of the country where the spring is an extremely rainy season, then you might want to schedule your chimney removal for a different time of year.

Is there anything else homeowners should know about or be aware of regarding chimney removal?

For example, if you live in a $350,000 home and you remove the chimney that vents your fireplace, you’re reducing the value of your home by $35,000. So really weigh your options before making the decision to permanently remove your chimney.

It could be in your best interest to spend the $10,000-20,000 to fix it or tear it down and rebuild it. You would still be ahead of the game and have a selling option should you choose to move some point in the future.

One last thing, chimney removal is a big job that requires a lot of planning, a lot of knowledge, and a lot of skill. So, who you choose to do the work matters. Find out what makes a Chimney Safety Institute of America (CSIA) certified chimney sweep uniquely qualified for the job by heading to www.csia.org.

Chimney Removal 101: What Every Homeowner Should Know was last modified: December 9th, 2020 by Chuck Roydhouse
×

Thank you for reading!

We would love to stay in touch with:

Process for removing a wall between kitchen and living room

How to deal with constructions in your neighborhood

Everything You Need to Know About Timber Frame Homes

What Is the Future of 3D Printed Houses?

Benefits of Using ICFs In Your Home

Renovating a House Checklist for a Well-Planned Project

Subscribe to receive home maintenance to-do list and top tips from experts to guide you through your renovation journey.

Please enter a valid email
Thank you for the subscription