Resurrecting a magnificent building that has stood the test of time is not just about doing the repair work. It is about bringing back a part of history, making sure that it stays preserved in the best possible manner. One such fantastic transformation that we witnessed was the exterior painting project of the Gothic Revival Victorian House makeover in Newton MA. The entire work was carried out by Catchlight Painting — an industrious group of hired professionals from the Greater Boston area. In fact, they are popular throughout New England.

The company has more than 25 years of experience — making them an expert for any kind of interior and exterior painting projects, especially one that needs sensitive care.

No wonder they provide exceptional service. A lot of credit to their success needs to go to their well-trained, communicative, capable, and friendly crew.

Coming back to their exterior paint makeover of Gothic Revival Victorian house in Newton MA, the transformation was incredible. The professionals understood that this vintage building deserved all the special care — and made sure it got just that. 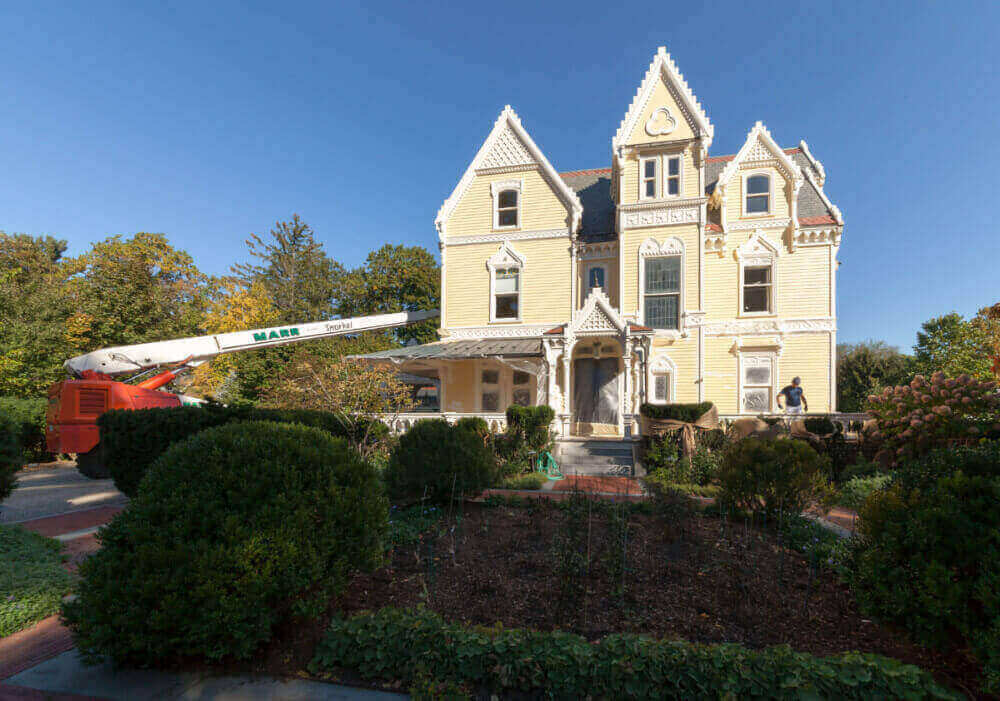 Look at the stunning gingerbread detailing on the dormer peaks and you’ll know what we are talking about. This magnificent house — an architectural gift to the neighborhood and town — needed the best treatment possible.

Before giving a step-by-step evaluation of the process, let’s go back a little to its history.

When was the Gothic Revival period?

Needless to say, the professionals were concerned about preserving the beauty of every single corner.

What was the cost of the entire project?

If we tell you the total cost of the project — from a renovation-needing structure to the finished product that shone with its past glory — you’ll not believe it. The 1310-hour-work costed only $98K. Incredible, isn’t it?

What did the renovation work entail?

This 1875-dated Victorian house required some carpentry repair and thorough cleaning and repainting. The colors had to remain the same as the original one. 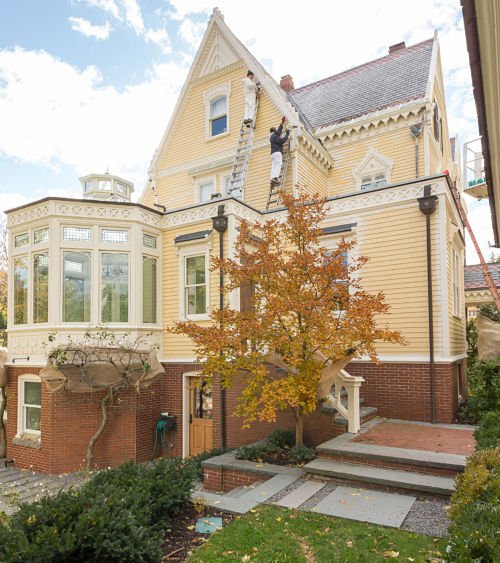 The work took place during the fall season. And the timing was intentional. The crew wanted to avoid the summertime overhead sun which would mean less shade. The rule of thumb for a good painting job is that it should not be undertaken in direct sunlight. Paint applied to a hot surface dries and cures too quickly — degrading the paint’s long-term performance.

The team was tasked with choosing a premium, long-lasting exterior paint. They used one of the best paints for such delicate work — Benjamin Moore’s Aura.

It boasts fantastic depth and sheen, and doesn’t fade easily. It’s also color-rub-off resistant. The paint touches up well — leaving a breathable coating on all sidings and trims. The best part is that it even protects the surface from mildew growth. 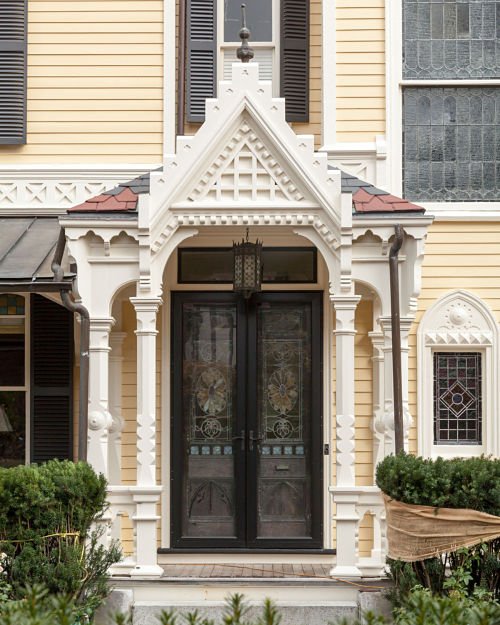 To begin the renovation, the crew got an 80’ boom lift. They wanted to avoid damaging the formal gardens or any other delicate structure. A lift insured that there were no ladders or people on the original slate roof. 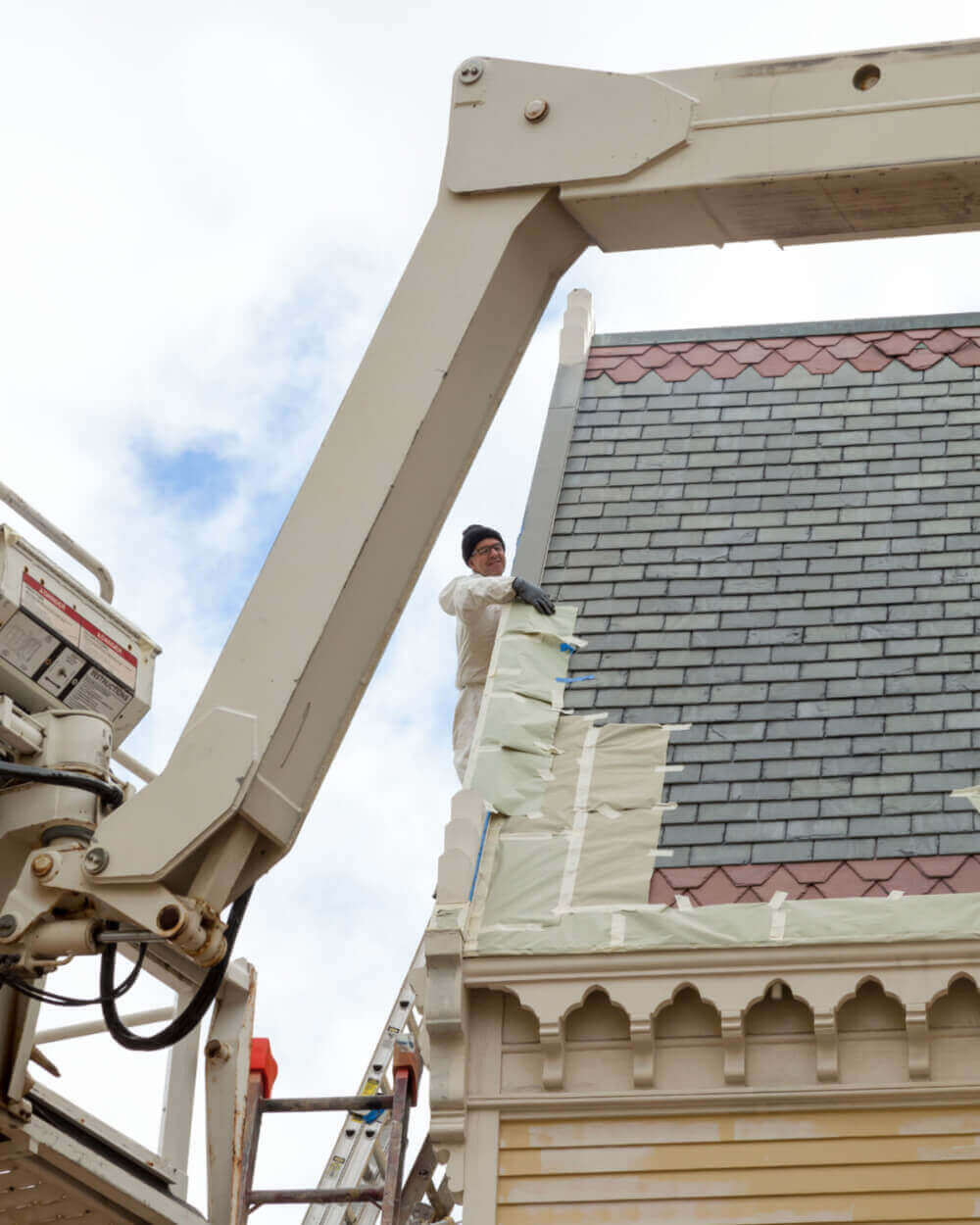 But, getting a lift close to the building had its own challenges. They placed two layers of ½” plywood to protect the driveway and distribute weight evenly. The last thing they needed was to compress the driveway pavers. They were also careful enough to avoid oil spillage and staining the driveway. 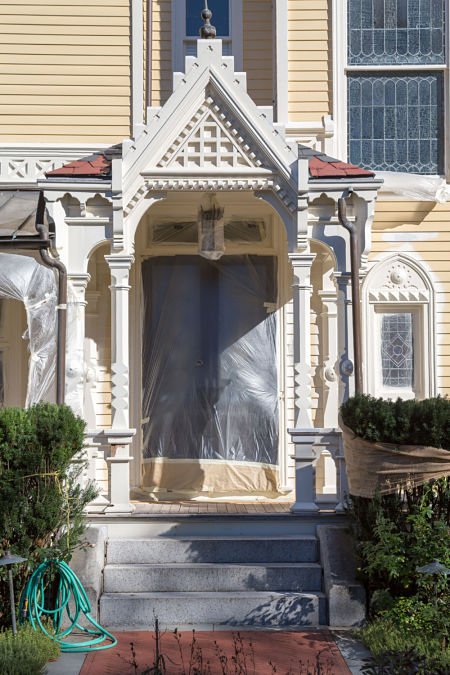 The next step was to mask adjoining surfaces before spraying the trims. The reason they chose sprays was because of their efficiency and cost-effective nature. A spray leaves behind a uniform coating and color coverage. This kind of painting is time-saving and shows depth. 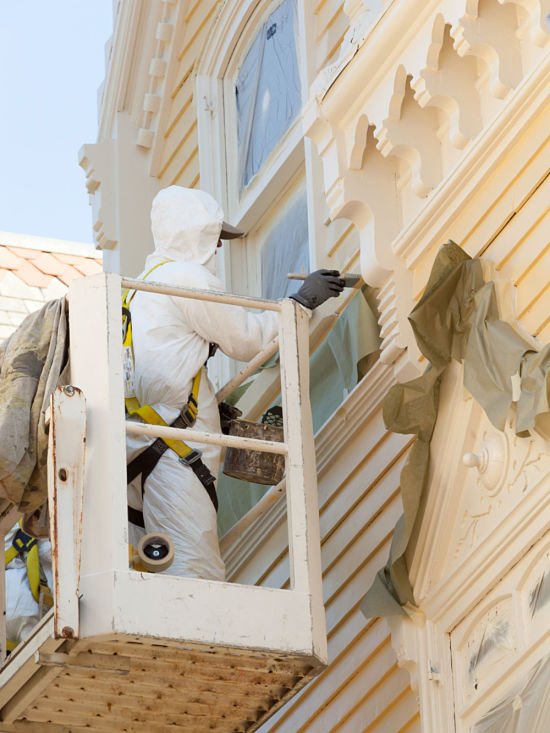 We were impressed with the fact that the team of professionals was alert and cautious. The painter wore a safety harness while in the boom lift bucket. The idea was to protect him against any accidental, sudden movement of the boom — which could risk his life. 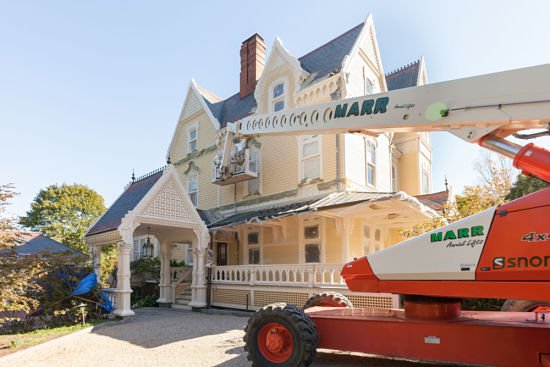 Notice the extensive use of protection on the metal roof, copper flashing, and landscaping. Each and every surface was painted carefully and correctly. Even the evergreen boxwood shrubs were protected against accidental spillage. 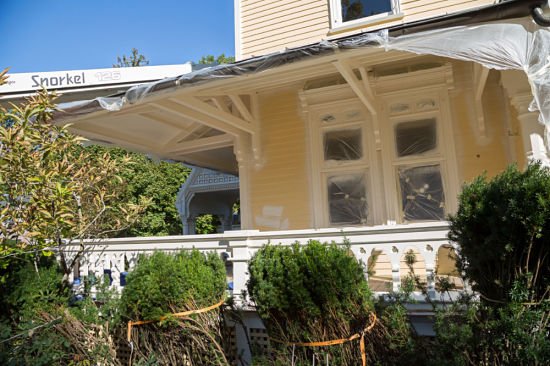 The best part about the crew was that even though they knew that overspray and paint drips could not be seen so high, they went ahead with paper masking on the second-floor frieze, fascia, and window capitals as well. They even removed existing, hundred-year-old paint drips visible on some parts of the roof slate. Impressive! 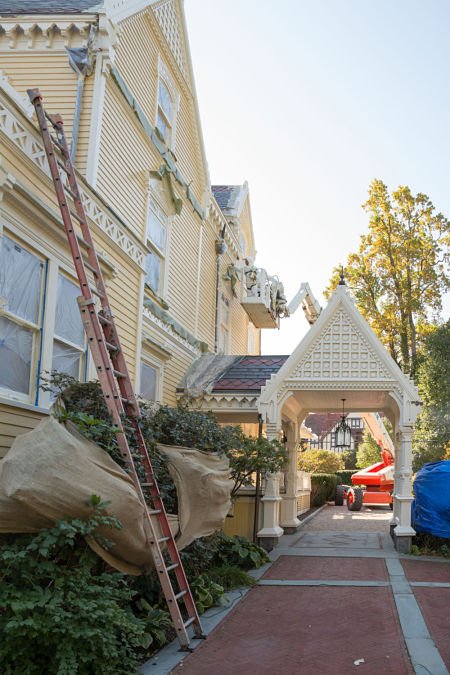 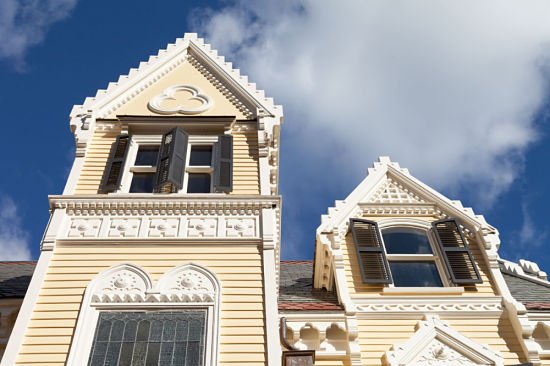 There was special treatment in store for the wood shutters: 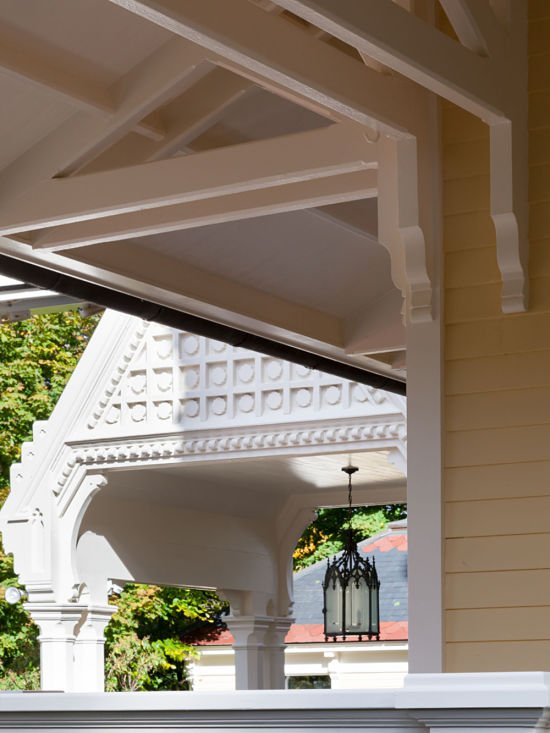 Since the house is so impressively ornate, Catchlight Painting made sure that the porch too was covered well. If the original builder and architect worked in harmony to ensure the best Gothic Revival features — they knew they had to up their game and do the job responsibly. 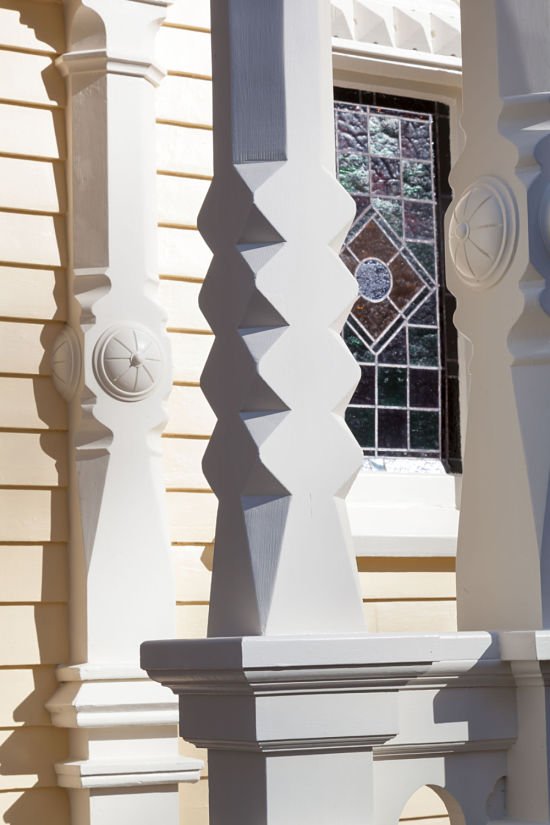 Look at the pragmatic geometry of the porch roof overhang. Every beam, bracket, or rafter seems to be perfectly juxtaposed against the elaborate artistry of the  porte-cochère.

The Doors and Windows 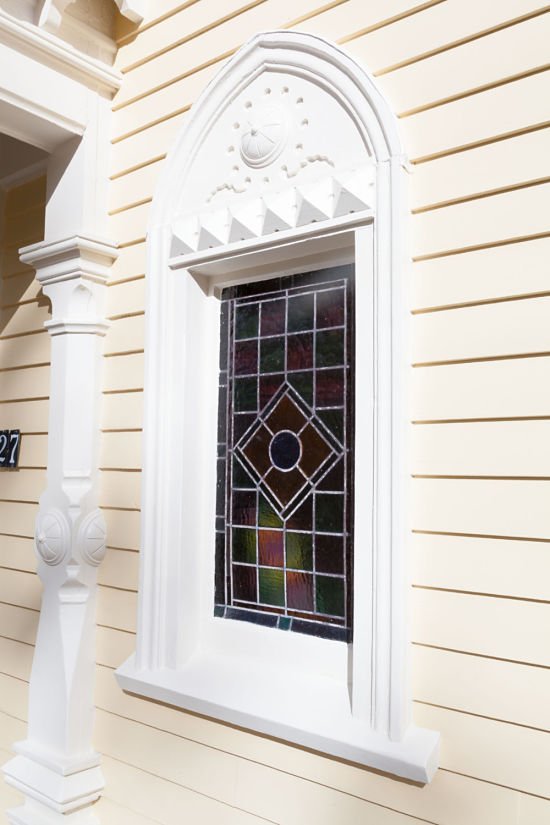 Every single window and door was cleaned thoroughly and painted to showcase its gothic features in the best way. The magnificence of the building warranted this special care.

Once the workers were satisfied with the final results — the last step was to clean up. Any debris, cans of paints, or ladders — were taken care of promptly.

If you didn’t see the sparkling building with its renewed gothic charm — you wouldn’t be able to guess that someone was here to paint. The Herculean task of this Gothic Revival Victorian house makeover, in Newton MA, is a benchmark in terms of professionalism.

Ramona is a content writer for Kukun. This experienced blogger uses simple and succinct words to decipher the complex phenomenon called life. An avid traveler, she’s a digital nomad at heart and an animal lover from the depths of her soul.

Create an eclectic interior design with these cool tips

Useful she shed ideas and tips for you

Stunning home art room ideas for the artist in you

Why is Interior Design Important to Home Remodeling?

11 Kitchen Quartz Countertop Colors That Will Be Huge in 2021