Find just the right loan for your needs

Manage your renovation project and your home

Join as a pro

Largest normalized collection of building permits in the US

Organizing the information surrounding every home, and making it us eful to all

No Account exits for .Maybe signuped using a different or incorrect e-mail address.

We need a little more information.

Enter the email id that you want to associate with your Kukun Account.

We can’t think of a home without a kitchen. It’s more than a place to cook and eat food. It’s where we bond, where we make beautiful memories. And, that’s the reason a kitchen has to be all that you dreamt of. Its design and layout have to be perfect for you. We bring you two such popular layouts — kitchen island vs peninsula. So, which one are you going to choose for your home?

In this article, we will give you an honest comparison between the two. Help you select the one that fits the bill better and utilizes your kitchen to its best capacity. We want your family to be most comfortable here — yearning to spend as much time together as possible over a hot meal. 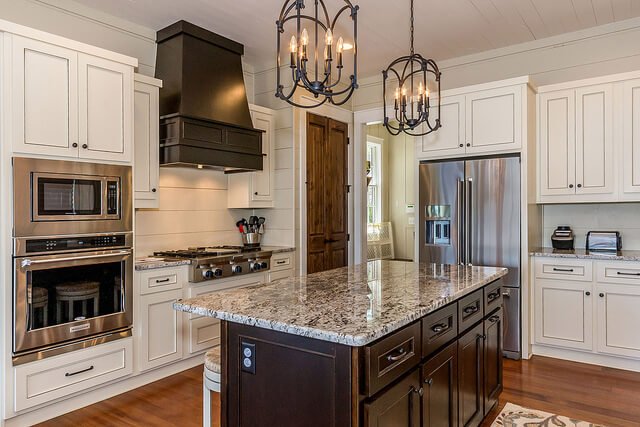 What’s the difference between an island and a peninsula?

While both designs create extra space and storage in the kitchen, the difference lies in the way they are structured. The concepts are very much similar to what you’ve studied in your geography class.

An island is a free-standing counter, open on all four sides. It’s a separate unit which stands on its own in the middle of the kitchen. A peninsula, on the other hand, has one end attached to a wall or a cabinet. It has three open sides. For this reason, it’s viewed as an extension of the rest of the kitchen.

Let’ go back a little in time, during the 1970s to be specific. Peninsulas were hugely popular then. These perpendicular counters, which jutted out from a wall, were the best option to demarcate the kitchen from the dining area.

Planning to remodel your kitchen? Feel free to try our estimator tool to see how much the cost of the project would be!

They were perfect for small kitchens, effortlessly converting an L-shaped kitchen into a U-shaped one. They added aesthetics as well as storage to the living space in the process.

Then came the kitchen islands and homeowners rushed to embrace this modern, versatile design. It offered them a larger, more open concept kitchen layout — even if it meant sacrificing a little bit of storage and walking space. You could add a sink and cooking surface to it. And, lots of extra counter space. The effect was ultra-modern, chic.

Even today, people across the globe have different perspectives when it comes to kitchen island vs peninsula. And, why not? They deserve to have a choice. Fortunately today, peninsulas have made a comeback and how! Instead of the typical U-shaped ones, they are now available in varied designs.

We have compared the two in terms of seven parameters and then summed up their differences. We hope this article offers all that you’re looking for…and then some. So, here goes. 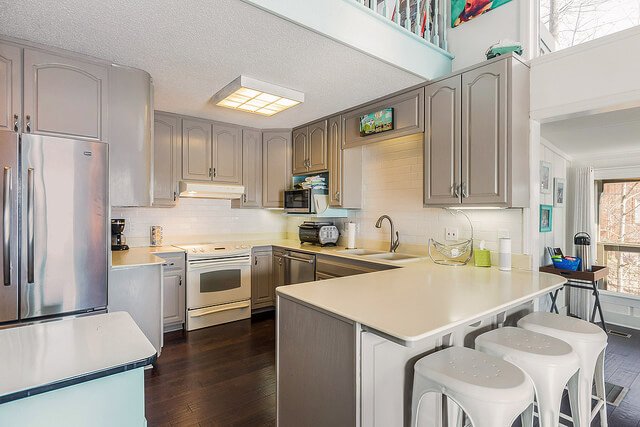 Those who spend a lot of time in their kitchens will definitely agree with the National Kitchen and Bath Association (NKBA). According to them, the main axis points in a kitchen are the sink, stove, and refrigerator. Together, they make the kitchen work triangle.

How they are placed in relation to each other makes a lot of difference to the way you work. The layout must offer clear space and path for the cook to operate. It must increase efficiency, not hamper it.

For an ideal setup, the sum of the distance between each of these should not be more than 26 feet. Furthermore, each of them shouldn’t be less than four feet or more than nine feet.

So, whether installing an island or peninsula, do ensure that you DO NOT block this triangle. If the structure disrupts this workflow, then it’s not a good fit. Period.

Because an island gives you clear access to the workstation on all four sides, it frees your movement in the kitchen. It creates a perfect point where your friends and family can be part of the kitchen activity without being intrusive. Such a design is ideal for L- and U-shaped kitchens.

The peninsula suits smaller kitchens and is easier to structure into the kitchen design. As mentioned above, it improves your L-shaped kitchen — offering a natural border between your kitchen and dining area.

Select the project that you would like to calculate the renovation cost for from the options below: