4 Best Types of Toilet Flush Systems for Your Bathroom

Find just the right loan for your needs

Manage your renovation project and your home

Prepare my house for sale

Learn what projects you should do before selling your home

Join as a pro

Largest normalized collection of building permits in the US

Organizing the information surrounding every home, and making it us eful to all

No Account exits for .Maybe signuped using a different or incorrect e-mail address.

We need a little more information.

Enter the email id that you want to associate with your Kukun Account.

Are you tired of your existing toilet flushing system? Do you want to prevent any kind of clogging at all costs? Or, are you looking for a model with high efficiency that doesn’t waste a huge amount of water per flush? This article is for you. You can peruse through the different types of toilet flush systems and choose the right one for your bathroom.

Planning a renovation for your bathroom? Try our free bathroom remodel cost estimator; it’s easy and convenient to use!

Most homeowners select their toilets on the basis of looks, size, design, water consumption, brand name, and of course budget. But, there’s something even more important. The types of toilet flush systems you choose. They determine how powerfully your toilet bowl clears the solid and liquid waste. A good flushing system can prevent problems such as clogging — making your life easier.

Interestingly, the idea of a flushing toilet has been around for quite a while. Historians believe that modern, convenient flush toilets surfaced when bathroom technology arrived in the twentieth century. And today, a good number of toilets have even advanced to automatic flush systems.

All in all, we cannot deny the convenience that these different types of toilet flush systems provide us. There are a lot of flushing systems to choose from but ultimately it boils down to user preference. 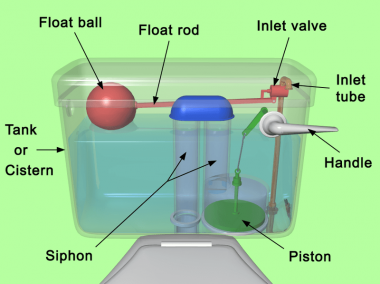 When choosing any flushing system, your goal should be:

Take a look at our full bathroom remodeling guide to cover all the aspects of the process.

There are four types of toilet flush systems that are very popular with most homeowners. You can go through them and make an informed decision about which one fits your style. 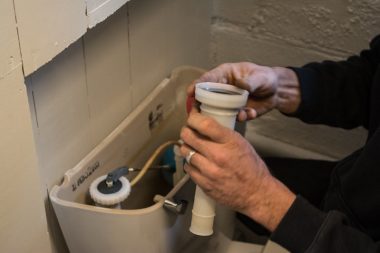 As the name suggests, a gravity flush system makes use of the water to create a flushing pressure. It then forces out everything from the tank and bowl through the trapway. The siphoning action in the flushing cleans the bowl thoroughly.

Usually, in a gravity flush toilet, water tanks sit directly on top of the bowl itself. Or, you could have an elevated cistern whereby the increase in the distance to the toilet bowl maximizes the pressure.

Due to its simple structure, and lack of extra moving parts, a gravity flush is one of the quietest flushing systems. Moreover, it’s very easy to maintain too because of the natural flow of things and no-fuss mechanics.

Is It Possible to Relocate a Toilet? Let’s find out! 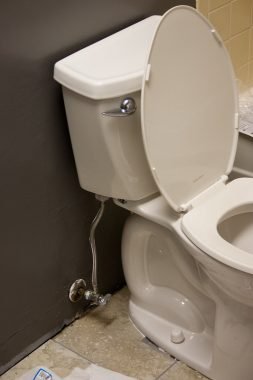 Pressure-assisted flush systems are quite similar to gravity flush systems, but a lot stronger. They have an extra mechanism whereby the water is sent to the toilet bowl with more force.

Actually, a plastic tank contains an air-filled balloon that’s pressurized every time water starts to refill in the toilet’s ceramic tank. When you flush, the compressed air inside the balloon pushes water into the bowl at a high flow rate.

The best part is, this system uses less water and is still quite strong. Let’s just say, it uses the same amount of water as a gravity flush but is more effective because of the extra force applied during a flush. As a result, such a toilet is less likely to get clogged.

However, where there’s pressure, there’s bound to be noise. No wonder, pressure-assisted toilets are louder than other flushing systems.

Read more: The Most Popular Types of Toilet for Your Home 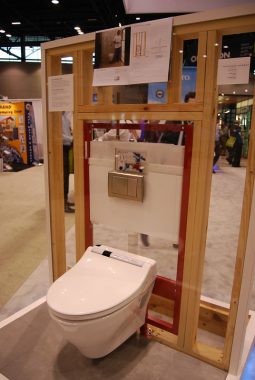 There’s a good reason why dual flush systems are one of the most popular flushing systems despite being a recent entrant in the field. They have an environmentally conscious design whereby they allow you to choose between using more or less water — depending on the type of waste you need to flush.

There are two levers or buttons installed on the same toilet unit. You can either make a full flush or a partial flush. The former uses roughly 1.6 gallons of water and is good for removing a mixture of solid and liquid waste.

Don't worry about your money

Explore the best financing options for your next bathroom project

A partial flush, on the other hand, uses 1.1 gallons of water. It’s designed for only liquid waste. Today, many countries are opting for a dual flush system in their new constructions because of its impressive water-saving capabilities.

Also known as a tornado flush, this new technology from Toto toilets is quite interesting. The system releases water into the bowl using two large nozzles on either side instead of the traditional rim holes. The propulsion system ensures that more water is directed to the siphon — creating a centrifugal, cyclonic rinsing action that’s really efficient. It even uses some gravity flush methods in order to complete the process.

The high-efficiency flush uses only 1.28 gallons per flush for both solid and liquid waste. Here too, there will be a significant reduction in your monthly water bill.

The Future of Toilets

We understand that flushing systems provide a convenience that’s matchless but they do account for a huge portion of water usage (or wastage!) within a household.

Fortunately, in 1994, the environment protection act was passed. It stipulated that no newly manufactured toilet could use more than 1.6 gallons of water. Efforts to make these systems more efficient by the United States Environmental Protection Agency (EPA) are ongoing.

Very soon there will be toilets without flushing mechanism. You will find options that will minimize water wastage. These will include:

Such toilets will be suitable for areas that cannot support proper septic systems or cesspools.

If you’re contemplating installing a new bathroom or replacing an old toilet, remember that a good flushing doesn’t just get rid of the waste but also cleans the inside of the bowl. Therefore, it’s important to choose an efficient, powerful, and low-maintenance flushing system.

Ramona is a content writer for Kukun. This experienced blogger uses simple and succinct words to decipher the complex phenomenon called life. An avid traveler, she’s a digital nomad at heart and an animal lover from the depths of her soul.